How many units of Botox will I need? 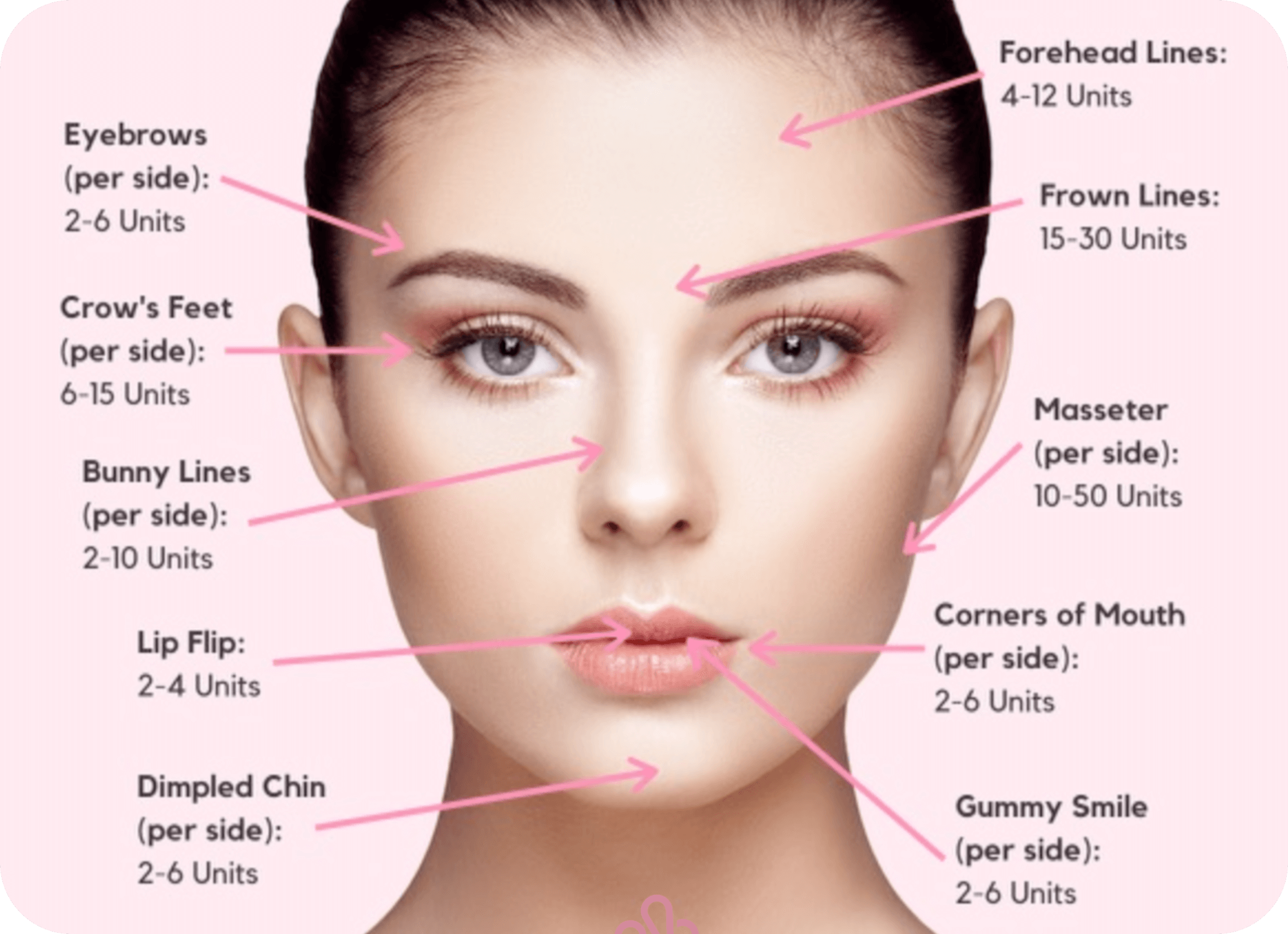 The most common areas that are treated with Botox are frown lines and crow’s feet, however there are many other uses that many people aren’t even aware of, that can greatly improve the appearance of your face. The number of units used for these procedures vary depending on several factors including area being treated, age of the patient, muscle tone and skin quality. The graphic below shows how many units of Botox it takes to treat these various areas of the face. In general, more units are needed if the muscle action is greater in the area being treated or if the muscle itself is larger. The amount of units listed below are just a range and apply to women under 40. Older patients and males will generally require more units.

Frown lines are caused when you repeatedly furrow your brow. They can make you look older than you actually are and they can give you a permanently grouchy look. The number of units used depends on the length of the wrinkle, but most people need between 15-30 units to treat frown lines. Frown lines begin between the eyebrows, extending both upward and downward, and sometimes even outward. Making a conscious effort not to frown will prove to be ineffective, as there is a tendency for people to frown in their sleep. Once the frown line is deep enough and is present even when your face is at rest, it will look like a deep “11” is engraved between your eyebrows, making you look angry, even if when you’re not.

Continually raising your eyebrows results in the formation of a series of horizontal forehead lines. Over time, lines will form so that they are evident even when your forehead muscles are at rest. Neuromodulators are an effective solution for smoothing out these lines and wrinkles. The number of units needed to treat forehead lines varies from patient to patient and depend on how deep their lines are and how strong their muscles are. Typically however, 4-12 units are necessary to smooth this area out.

Crow’s feet are the lines on our faces that form when we squint and when we smile. Their formation are a natural part of aging and most people notice them in their mid-forties, although they may start showing up as early as age 20. 6-15 units injected on each side of the eye, will smooth this area out, and impart a fresher, younger appearance.

The “lip flip” is a very popular use of Botox. It involves the injection of neuromodulator into the muscle above the lip, which is called the orbicularis oris. The placement of the wrinkle relaxer in this area causes the lip to flip outwards slightly, which creates the illusion of a fuller or more prominent lip. This can be seen as a more subtle option than getting lip fillers.

The appearance of a dimpled chin is caused by excessive contraction of the muscle under the chin. Not only does this cause the chin to quiver, but it tends to make the texture of the chin look like an orange peel. 2-6 units of botox on each side of the chin is a simple remedy to this issue, leading to a smooth chin area.

Some people have excessive gum display when they smile due to their facial anatomy. Botox is an effective solution to address this issue by relaxing the lip so that it won’t rise as high during a smile.

Corners of Mouth (2-6 units per side)

As part of aging, the area at the corners of the lips begin to sag, which results in wrinkles that extend downwards. These downward turning lines can sometimes make a person look like they are grimacing even when their face is at rest. A small amount of botox on each corner can help mitigate this downward movement.

Applying Botox to the masseter muscle, located on either side of the jaw, will help to relax this muscle, which has the effect of reducing its size. This will impart a slimmer, narrower and more feminine profile to the jaw. This is especially beneficial for women who have a square jawline, as an oval-shaped face or a heart-shaped face are widely considered to be the most desirable. In cases where a patient has an asymmetrical face, masseter Botox can also be used to restore symmetry to the face.

While this provides a general overview of the amount of botox a female patient under 40 can expect to need based on area of the face, like most things in medicine and aesthetics, there is no one-size-fits-all solution. The best way to determine how many units of Botox are needed for your specific concerns is to have a consultation with a qualified cosmetic injector. During the consultation, you will be examined and evaluated by the injector and they will recommend the appropriate amount of units that will give you the outcome you seek.

Having BOTOX® injections and treatments with dermal fillers are great ways to non-surgically diminish the signs of aging. At the Skinjectables Cosmetic Clinic in Toronto, Canada, our Anti-Aging Specialists use dermal fillers and neurotoxins to essentially ‘turn back the hands of time.’ With years of experience, our Expert Injectors use their skills to provide patients with a refreshed, more youthful-looking appearance.

If you are interested in learning more about the various facial-rejuvenation procedures available at the Skinjectables Cosmetic Clinic in Toronto, contact us today at 416-546-5200 and book your initial consultation. Our experienced Anti-Aging Specialists can use a variety of non-surgical procedures to help you look more refreshed. Furthermore, if you have been diagnosed with axillary hyperhidrosis or would like to reduce the size of your masseter muscles, our Experts can help.